The first information we have about the existence of decorative gardens in Spain dates from the Greek times. Although the Romans adopted these custom centuries later, it was not until the Muslim occupation that a proper gardening culture was developed in Spain, mainly from the 9C to the 14C centuries.

During the expansion of the Arab culture, particularly fond of parks and gardens, Andalusia was an area with a remarkable splendour, mainly due to newly created ditches and channels. The highlights of the Arab Spanish Gardening are the Gardens of the Palacio de la Alhambra and the Generalife.

Thanks to the irrigation systems created by the Arabs in the Valencia and Murcia areas, some of them still in function, not only fruits and vegetables are cultivated, but also exotic African and oriental plants and flowers.

During the Renaissance period in the 14th and 15th centuries, the concept of gardening suffered a dramatic change, with broader spaces added to fountains and sculpture groups. Ever since, gardens and parks were planned according to previously designed drawings.

In Northern Spain, where the Arab influence was far less important, gardens were cultivated in religious premises such as monasteries, abbeys and convents. Working in vegetable and kitchen gardens was part of their daily monastic duties and a food source. Decorative gardens were planted inside the cloisters as a place for meditation, peace and prayer.

When Italian architects and gardeners where out of fashion, the French style took over, inspired mainly by the Versailles Palace in the outskirts of Paris.

During the big industrial and economic development, new private gardens were created as a symbol of prestige by the wealthiest families. Most of them were donated later to public institutions.

Did you know that the first botanic garden planted in Europe was opened in Spain?

Would you like to visit one of the oldest walled gardens in Europe?

Why don’t you come and discover the reputed Andalusian “patios” or inner courtyards in the springtime?

How about the countless windows embellished with flowers, abundant mainly in Andalusia?

Did you know that the largest Palm Grove in Europe is to be found in Spain?

Plenty of Spanish parks and gardens are awaiting your visit.

Come to spain and we will show you our gardens! 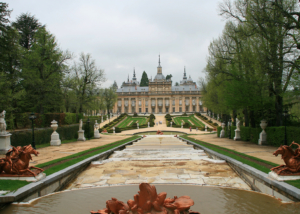 GARDENS OF THE CENTRE OF SPAIN (5 days/4 nights)

GARDENS OF THE CENTRE OF SPAIN (5 days/4 nights)